What better day to talk about food than the day after a huge feast? (I hope all my American readers enjoyed a wonderful Thanksgiving!) eemusings commented on a previous post that she wanted to hear more about the food I ate in Scotland. So it’s time to dish up the details. *hee, hee, hee*

I had one big constraint on my diet: I had to avoid cow milk, cream, and cheese. Way back in my late twenties I had realized that cow milk and cream caused problems for me, but a little lactose replacement usually helped. Unfortunately, earlier this year I found out I have diverticulitis. In the months since that diagnosis, I’ve discovered that eating lots of cow dairy causes enough irritation in my gut that it flares up. So it was important that I avoid cow dairy as much as possible on the trip. (I wasn’t the only person who had dietary constraints on the trip. My roommate and friend A was avoiding most high cholesterol foods like red meat and butter, as well as sugar. And there was a woman in our group that was so deathly allergic to gluten, beef, and eggs that she carried an Epipen.)

Before heading over to Scotland, I read up a bit about what types of foods I may encounter and developed a short “wish list” of things I wanted to try. Unfortunately, my cow dairy issue made it impossible for me to try cullen skink, which was a very popular (and delicious sounding) soup frequently on the starter menu. However, kippers and haggis were at the top of the list. I love oily fish like sardines, mackerel, and even anchovies. I’ve eaten canned kippered herring here, but it was nothing like the  kippers I enjoyed at breakfast many mornings. They were smoky, crispy, salty, and absolutely delicious! 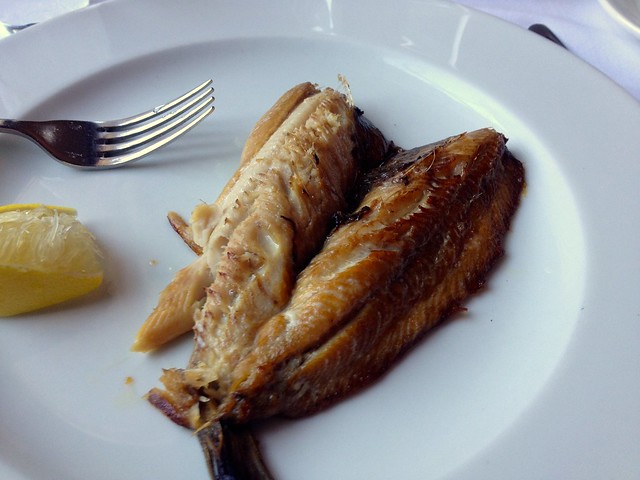 One of our tour guides suggested that those of us who liked kippers should also try Arbroath smokies, but the few times I saw them on a menu they had been cooked in milk. 😦

I tried haggis on my first night in Scotland and found it very good, too. Apparently the spices and seasonings used in haggis can vary quite a bit from place to place, and the restaurant where I first tried it used lots of warm spices. The richness of the organ meats and texture of the oats still came through and made it a truly memorable dish. On Isle of Skye I had vegetarian haggis with my breakfast. While still very tasty, the lack of organ meats made the texture and mouthfeel quite different.

I expected the food to cost more than it does here in the States and budgeted accordingly. Also, this was a luxury tour and the hotels where we stayed and dined reflected that. Eating dinner at the same hotel where we were staying was usually the most convenient option because we were in country lodgings and not cities or large towns with lots of restaurants in walking distance. There were a few times that I ventured out via cab to other villages or into town to dine, but often I just ate at the hotel with the group or with A, who usually just wanted to be “in for the night” after a day of activities.

Full breakfast was always included with our lodgings and it was possible to really fill oneself up, too. Typically there would be cold breakfast items on a buffet table available for self-service: pastries, cereal, yogurt, cheese, cold cuts, and fresh or stewed dried fruit. Cooked breakfast items on the menu always included oatmeal porridge, as well as egg dishes such as eggs Benedict (usually with smoked salmon instead of ham/bacon), scrambled eggs, or “full Scottish breakfast.” The latter usually included fried eggs, sausage, bacon, grilled tomato, and black pudding (blood sausage).

As much as I really need protein at breakfast to keep me going, that was way too much heavy meat for me so I never ordered the “traditional” full Scottish breakfast. Bacon in the UK was very different than the bacon in the US. It was much more like ham or the true Canadian bacon I used to get in Toronto.

I usually ordered eggs at breakfast, and my lack of critical questioning of the preparation method led to problems only a few days into the trip. I’ve been making scrambled eggs at home without milk for so long that I forgot that it’s usually standard practice to add it. At the Lake of Menteith Hotel I had been eating scrambled eggs with smoked salmon every morning for breakfast, and I had also knowingly cheated on my no dairy rule one night by eating sticky toffee pudding for dessert.

(But oh my goodness, the gloriousness that is sticky toffee pudding made me want to cheat again and again! The tour organizer also became a big fan of sticky toffee pudding, despite being a self-confessed chocoholic. Although she had traveled to the UK several times, she had never tried this dessert. I was pleased to convert her and vicariously enjoy it through her.)

By the time we arrived at our hotel near Inverness (the famous Culloden House just outside the city), I had realized the error of my ways and knew I had to increase my dietary vigilance. I went to bed that night with a hot water bottle (such a quaint feature to find in our room!) clutched to my aching gut, and a firm resolve to both not let any cow dairy slip past my lips and increase my intake of high fiber foods. Obviously, the apples I had brought with me and was consuming every day were not enough. Luckily, I discovered how delicious stewed dried fruit can be the very next morning at breakfast.

I’m not sure if the challenges I was having finding greens and vegetables (prepared without cream) was due to the posh menus at the places we were staying or if this was typical of the Scottish diet in general. On the one hand, I admired the fact that the restaurant menus reflected the season, with lots of root vegetables accompanying the mains. On the other hand, I desperately missed greens and salads. I had expected to find kale, at least. Indeed, I did see kale growing quite thickly in fields in the southern parts of Scotland, yet when I was talking to one of the friendly Scots later in the trip about those fields she said they turned the sheep into them during the winter.

Besides growing lots of kale for animal fodder, the southern areas in Scotland also cultivated a lot of fruit, especially berries. We noticed hoop houses filled with dwarf fruit trees and bramble fruits, and our bus driver told us that strawberries and raspberries were heavily cultivated in the area. Once we entered the highlands we saw mostly animals (sheep and cattle) grazing instead of cultivated fields.

But back to the meals!

Breakfasts were not only ample, one could really feast during lunches and dinners, too. I noticed that many restaurants offered two to three course fixed price meals for lunch and early dinner, just like in Spain. I took advantage of one such special at a restaurant in Inverness. The concept behind The Joy of Taste — a restaurant operating by principles sounding very much like a co-op — intrigued me, so I took a cab from Culloden House into Inverness to enjoy a delicious dinner by myself. My starter featured seared calf liver served over a bed of delicious salad greens (yay!) and my main course was duck served with lots of broccoli, courgette, and saffron potatoes. Dessert was a polenta cake made with honey and bramble berries. That was one of my more memorable meals in Scotland, although the relatively low cost was offset by the price of the taxis I had to take to and from Culloden House. (I stretched out my enjoyment of Inverness that evening by walking along the River Ness for a bit before returning to the hotel.)

That wasn’t the first time I had duck while in Scotland. It seemed to be the more popular form of poultry in the country. The menus frequently featured beef, lamb, pork, and fish, but rarely offered chicken. Considering how ubiquitous and popular chicken is in the US, I found this rather remarkable. Another difference between US and Scotland was in the cuts of pork. The most common cut of pork I saw on menus was not chops, but fresh pork belly. (Although I did enjoy a starter of some braised pig cheeks at Cross Keys pub in Kippen).

Scotland is a land with an extensive coastline and many, many fresh water lakes and streams. (I was constantly amazed at the number of gushing springs and waterfalls I saw from the window of the bus as we drove through the Highlands. There was water everywhere.) Fish and seafood of all kinds were plentiful on menus. I dined on fish and chips twice during my trip, but tried to keep my consumption of fried fish minimal. Salmon — both fresh and hot or cold smoked — were also featured quite a bit. I suspect most of it was from the fish farms we frequently saw along the sea lochs and coastline and not wild caught, unfortunately.

As we arrived on the west coast, we found that the local specialty was langoustines, which were tasty little crustaceans, although they took a bit of work to eat. 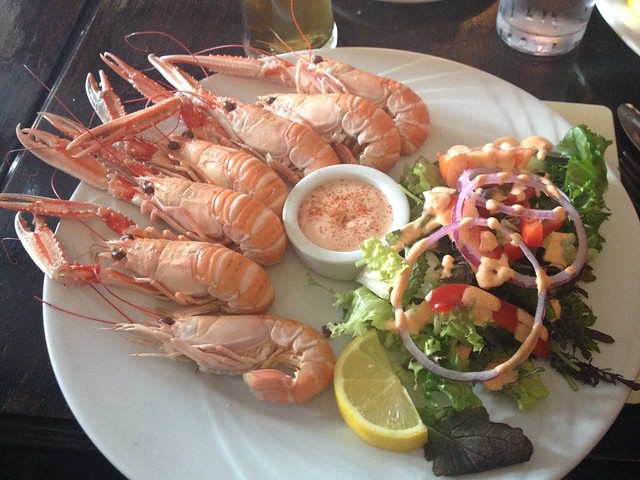 Oh, and as for beverages, I enjoyed both ales and wine with dinner, but of course enjoyed the whisky the most. 🙂 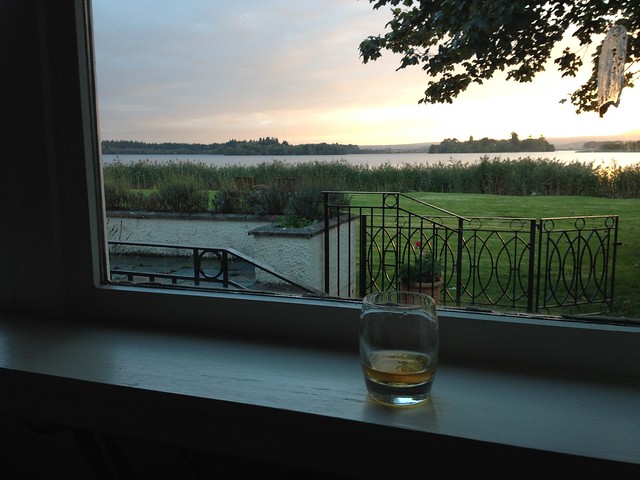 Fair warning: this is going to be a photo heavy post!

Scottish countryside can be stark, but it is stunningly beautiful. On our second day in Scotland, our group had a walking tour of Edinburgh. Our guide — a warm and knowledgeable gent who looked stunning in his kilt, tweed jacket, and hat (but I sadly can’t recall his name now) — told us we were in the least beautiful part of Scotland. We scoffed. On our return to Edinburgh at the end of the trip I recalled his words and acknowledged to myself how right he was.

I expected that the weather would be cool and wet, but we enjoyed mostly clear weather and several days with bright blue skies. 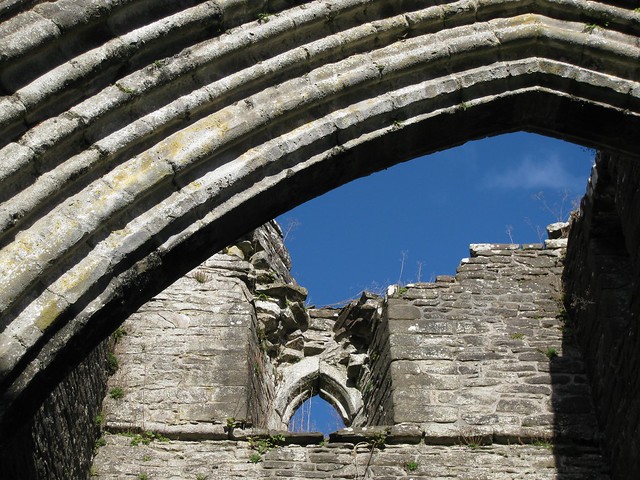 This was a splurge vacation for me which featured luxury accommodations and fine dining. My friend A and I saved a bit of money by sharing a room, but it was still one of the mostly costly vacations I’ve ever taken. I think it was money well spent. 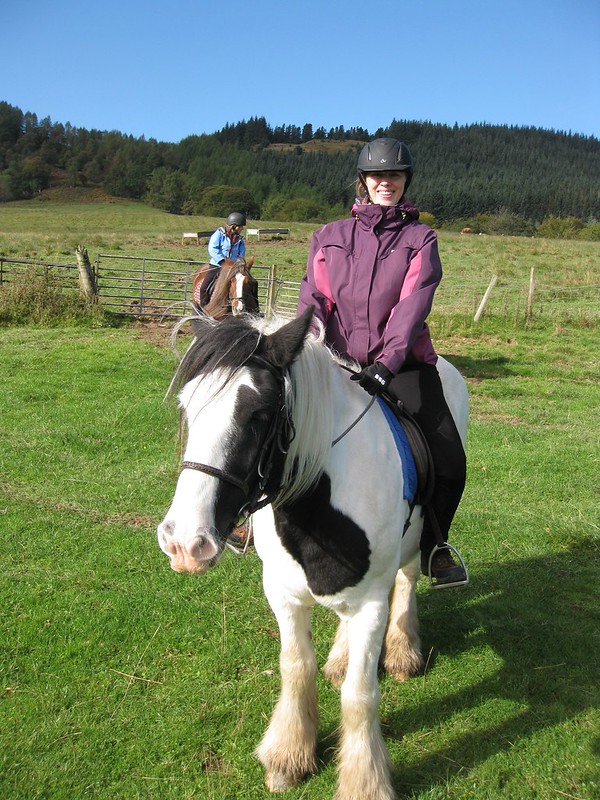 We covered a lot of territory in the 15 days we were there: Edinburgh, Lake of Menteith, Stirling, St. Andrews… 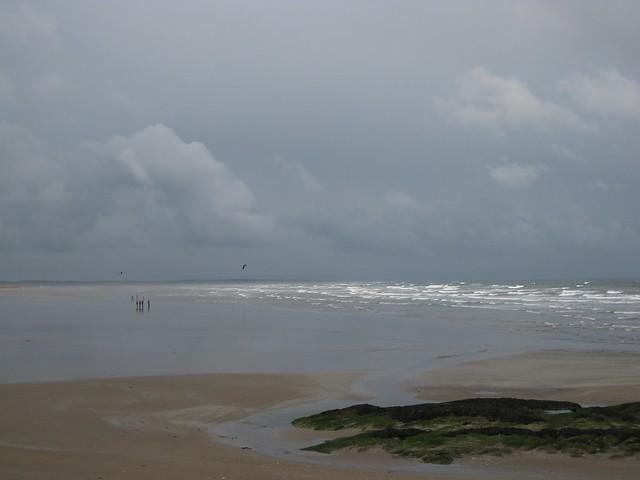 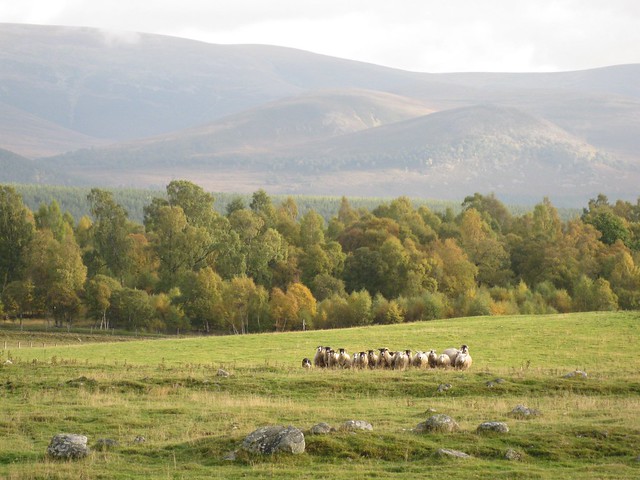 Inverness and its surrounds (including Loch Ness, Culloden Battlefield, and Clava Cairns)… 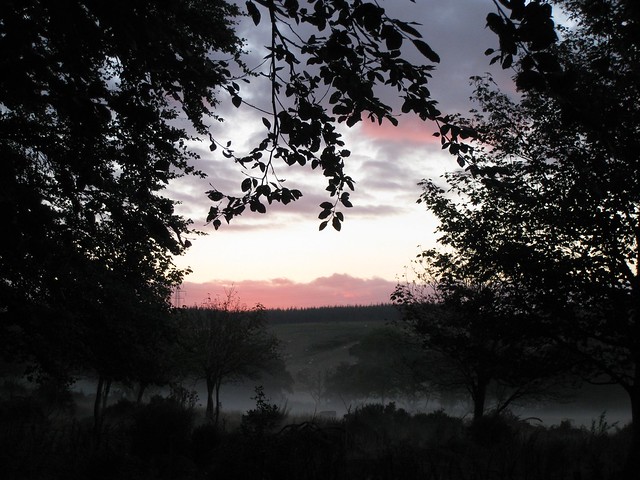 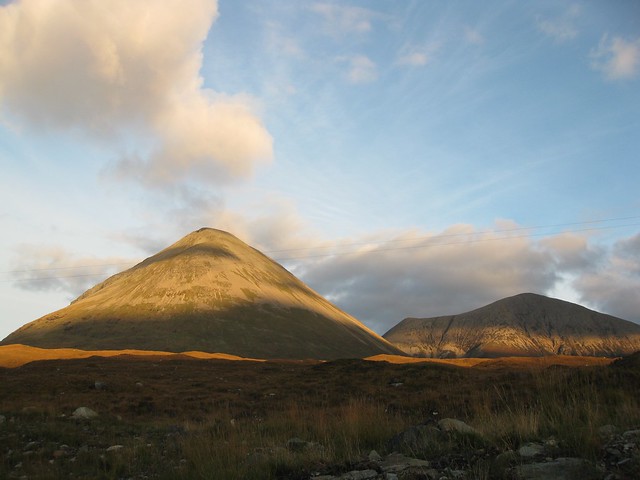 with its fabled Black Cuillin mountains… 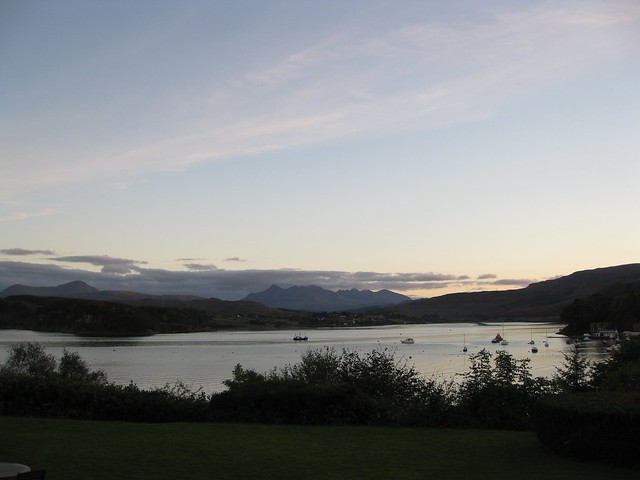 and lastly a charming country town in Argyll where I saw famous whirlpool, lots of local wildlife… 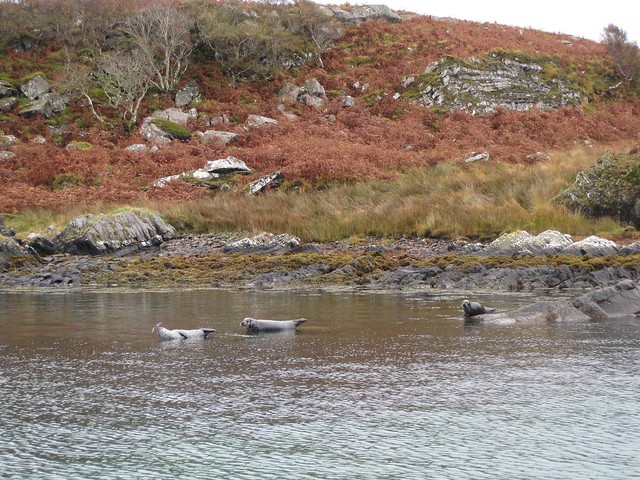 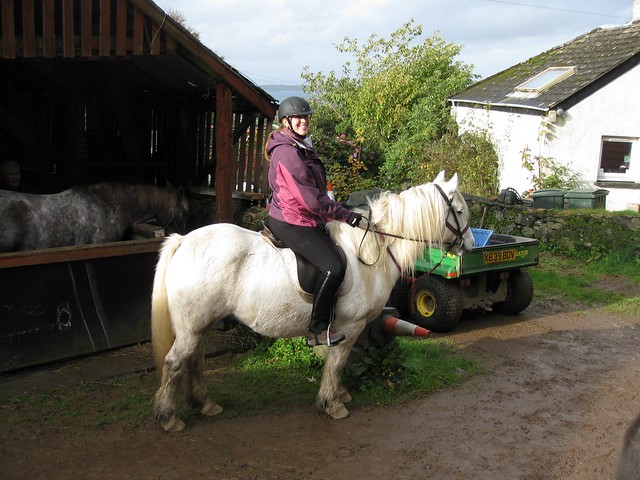 and may or may not have been assaulted by a spectral presence in the 16th century house at which we resided.

I would love to return to Scotland some day. Until then, I have many fond memories…and a small amount of whisky to enhance them. 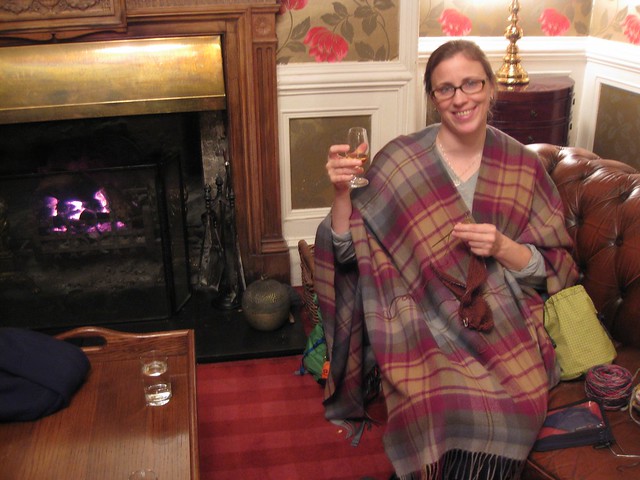 Photo details. (To see larger photos or the entire set, just click on a photo and it will take you to the Flickr set.)