I arrived in Napa, California two years ago today: December 1, 2014. It was raining that day and I recall being surprised by the weather. I was expecting there to be blue skies and sunshine since I knew the area was in drought.

The weather continued cool and rainy that first week. The movers unpacking my shipping container of belongings tracked wet leaves across the floors and cautioned me that the paint on the front steps made them slippery. Non-skid throw rugs and treads for the front steps were bumped up my priority purchase list.

The rains eventually abated by the end of the week. They returned a few times, but I enjoyed the mostly blue skies and sun. I savored the crisp air and cool temperatures that left a thin film of frost on my car windows overnight and once or twice led to a frost warning. I could still wear my precious hand-knitted hats, scarfs, and shawls, but didn’t miss the bulk of the thick down coat I had to don in Chicago winters.

Spring arrived in February, with new growth on the deciduous trees and blooming calla lilies in the front yard. The robins appeared in March, and by April I was already regularly wearing short sleeves and capris during my weekly hikes. In late May I was wearing linen and sweating during the day at the local music festival, yet still found it necessary to put on a fleece as the sun went down to combat the evening chill. From May through November I don’t recall any rain at all, but then the winter rains started again and the cycle was complete.

I’ve found that the seasons here are the same as back in Chicago, but they are on an accelerated schedule and there is no snow to shovel. The climate suits me, and my skin doesn’t dry up like it used to every winter in Chicago.

I love Northern California and am glad I moved here. Every single time my gaze falls on the high hills framing the valley, I smile and sigh with pleasure. Despite the health challenges that cropped up within just a few months of my arrival, I am happy in this place. But I am also frequently lonely.

It takes time to make friends as an adult. Friendships were easier while in high school and college, when everyone was moving through similar milestones. It seems that I am out of sync with the vast majority of people in this small town at the edge of the sprawling Bay Area. Most of the women I meet are wives and mothers, and their schedules revolve around their children and husbands. They may be able to meet once a week for knitting or the occasional game night, but they aren’t available on the weekends.

If I lived closer to San Francisco there would be many more single professional women my age and I would have a livelier social life on the weekends. I figured this out before I bought a house here and settled in more deeply. Despite the social challenges, I still chose to stay because I enjoy the other privileges that come with the lower density: quiet, lack of heavy traffic, shorter lines for services, quick access to large swathes of open space, and breath-taking natural beauty.

One year ago today I arrived in Napa and began my new life. The day I arrived it was cool and rainy, and it rained off and on for the next several days. No matter, it was better than freezing cold and snow, which I gratefully left behind.

I knew no one when I arrived. My sister had helped me drive from Chicago and introduced me to the one person she knew (the real estate agent who had sold her the house I’m renting). But it was up to me to make new friends and build my community.

Now I have several local friends. I have the network I need to support me when I need to travel (a boarding kennel I trust) or leave the house for a full day or many hours (a dog walker and accommodating neighbor). I have doctors (a primary care physician, a gynecologist, and other specialists) and a dentist.

I’m learning the patterns of the seasons. I’ve discovered when the hottest part of the day occurs and generally when the breeze works its way up the valley during the summer months. (And when to open and close windows to close out the heat or catch the breeze.) I know where the water tends to puddle in the yard during a good, soaking rain. I know when to prune the roses, and what types of pests eat holes in the Meyer Lemon tree leaves. (It’s snails, and I’ve started the counter attack on them now).

There have been several visitors over the course of the year, and I plan to host one more in just a couple weeks. Living in such a beautiful area tends to lead to visitors.

Every day I am thankful that I had the resources and ability to move here. Every single day. 🙂

Next month I’ll celebrate one year of living in California. Woo hoo!

It’s definitely different here than it was in Chicago. Last night and today we’ve had the first real rain in 11 months. It was raining when I arrived on December 1 last year, and it rained a lot those first two weeks of my arrival. However, since then there has been negligible rain, as the drought continued into its fourth year. Today, though…today there have been downpours and hail, and as I currently write there is thunder and lightning, too. It’s a lovely change.

I’m going to try following my friend A‘s example and write every day of November. That means my posts may be shorter, but that’s probably better, anyway. Writing for long stretches just doesn’t fit my schedule very well. And, yes, I know that today is the second day of the month and I’ve already missed one day in writing in November, but I’m not shooting for perfection here.

When I first mentioned to my boss that I had an opportunity to rent a house in Napa, he seemed amused. “Let me get this straight: you’re moving California and you’ll be living in Napa. That’s just great,” he said with a chuckle. I didn’t understand his reaction, but when I mentioned it to someone else who lives in California (like my boss, who is a Los Angeles native) it was explained to me that he likely found it amusing — and perhaps enviable — because many Californians look at this area as a place to vacation.

While I am living in what may be considered “vacationland” even by other Californians, there are quite a few year-round residents here and they typically fall into two groups: those that are somewhat wealthy and likely retired, or those that support the tourist and wine industries.

I was invited to a party yesterday afternoon, and the other guests skewed mostly in the former group. That wasn’t a total surprise to me considering that the hostess was throwing a big open house to show her neighbors the results of an extensive (and expensive!) remodeling of her house. There were servers filling glasses, passing around hors d’oeuvre, and tidying up as guests came and went. It wasn’t exactly haute, but most of these people didn’t seem to be struggling to pay their bills. Although I know it’s sometimes true that some seemingly prosperous people are carrying a lot of debt, and I did meet one woman who started bemoaning her recent layoff from the local hospital and observed that she may be forced into an unwanted early retirement as a result.

Around town I see this dichotomy reflected quite a bit. I’m living in an area full of older homes, and not far from downtown. Most of the houses are small, but still pricey. Sister and I viewed a house just down the street that isn’t much larger than the cottage I’m living in and listed for $550,000. The house next door which is about as big as that one and sits on a fairly large swatch of green lawn was finally occupied (briefly) this weekend. When I met the owners (an older couple, one of whom is retired) they explained that their primary residence was on the Peninsula, which was why they weren’t around very much.

A few blocks away, the Health and Human Services department — the agency administering food stamps, WIC, and programs for low income families — is so large they have a veritable campus of permanent buildings and trailers, and there is a busy Head Start program based in the large park just up the street. There are neat houses with landscaped lots sitting next to houses that are more disheveled looking and occupied by people of more limited means.

Some houses still sport “yellow tags” from the earthquake that hit here last August, and about two short blocks away I saw a severely damaged, red-tagged house. 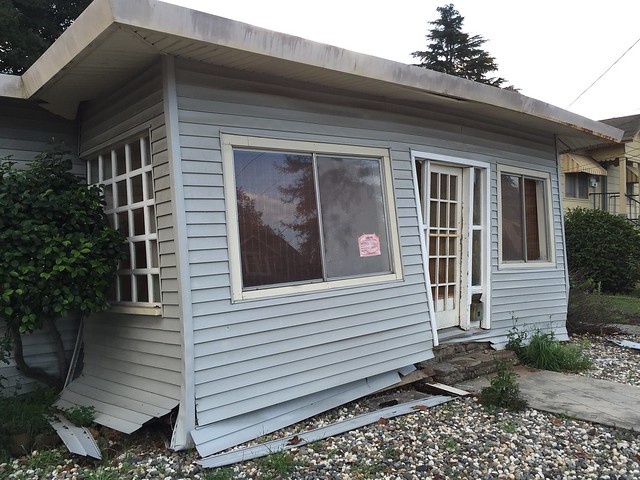 There was still a lot of broken glass on the sidewalk leading up to the door.

It’s no surprise that there is a large Hispanic population here. After all, this entire area used to be part of the Spanish empire. I see plenty of markets and businesses that serve a predominantly Spanish-speaking population, based on their signage and ads. For six years I lived in a Chicago neighborhood that had a large number of Spanish-speakers, and seeing the panaderias, tacquerias, and lavanderias brings back memories. It seems I may have plenty of opportunities to practice my Spanish as I stop in to pick up a tamales, fresh salsa, avocados, and other items that experience has shown are better purchased in ethnic markets. 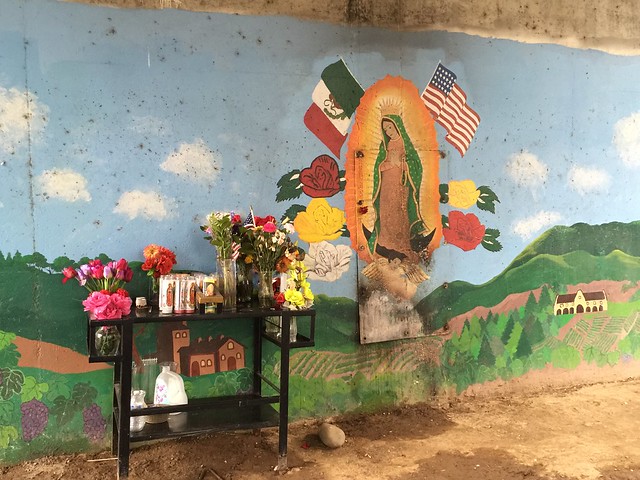 As I meet people and seek out services, I’m careful to note that I’m a working resident here. While looking for a massage, for example, I told people I wasn’t seeking a “vacation spa” experience, merely a way to work out the kinks in my back that developed from many days of stress and driving. I enjoy the fact that there are upscale restaurants in town and nearby, but I can’t afford to eat at them regularly (or perhaps not at all…I suspect a meal at The French Laundry will forever be outside my means). Nonetheless it’s nice to know I have the option.