I really, really hate shopping. I don’t enjoy browsing at clothing and shoe stores, so I only go into one when I absolutely must. That means I go in with a mission: buy a pair of black work pants, for example, or get some new gym shoes.

This is one reason why I don’t usually visit thrift stores for clothing. It’s possible to find some really great items at thrift stores, but it usually involves lots of browsing through the racks. Same thing for places like Marshall’s, Ross, and TJ Maxx. While I do go into these types of stores for housewares, I rarely need that stuff so visits are few and far between.

I pay enough attention to retail to know which stores are likely to carry what I want to wear, so that helps me keep my shopping time down to a minimum. And once I’ve gotten a good feel for a retailer’s clothing line, I will order online as much as possible.

So I really, really hate that my beloved Lands’ End has dramatically changed their classic Squall parka in all the wrong ways. I have a Squall parka that I bought several years ago. It’s awesome. I have a different Lands’ End coat — referred to as a “sleeping bag” by one of my colleagues — for the super cold days, but for most late fall/winter days between 35 and 0 F here in Chicago I can get by with the Squall parka.

Last winter, this coat seized up on me, though. The zipper completely jammed and I had to crawl out of my parka after I got home. There is no way to fix this zipper jam, although I have thought about replacing the zipper. The chance in finding a tailor who could replace the double zipper with a reasonable match in color is slim, though. I got a good recommendation from someone, but I have my doubts that schlepping this well-worn parka to a tailor nowhere near where I live or work will have the result I want.

I’ve already tried on their “updated” Squall parka and find it sadly lacking in some critical features. Such as being just slightly over-sized so I can wear a sweater under it. (Seriously, one should be able to layer up under a parka!) Also, having pockets that allow one to place objects like hats or gloves inside them. The “new” Squall parka has pockets that only accommodate a slender hand. I just don’t understand how a company that is based in Wisconsin could make such changes to their winter wear.

But because Lands’ End does guarantee their clothing, I’ve decided to try once more to exchange my broken down Squall for a workable Squall parka. 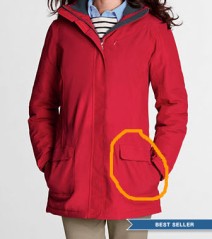 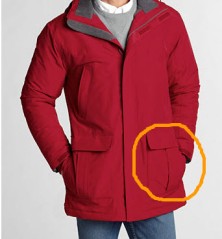 At left is the terrible women’s Squall parka, at right is the men’s version. Note the areas circled.

How does the men’s version of the coat differ from the women’s version? The pocket has a gusset! With a gusseted pocket, one can slip more than a single slender hand into the pocket. I should be able to stuff my hat and gloves in the pockets like I’ve been doing since I was…well…extremely young.

Yeah, the women’s parka is a bit more slim cut than the men’s but that also means I should be able to wear a sweater under the men’s parka, too. Wow. What a concept, eh? These parkas both have interior draw strings at the waist, so I could conceivably adjust the men’s parka to be a bit more fitted, too.

So, wish me luck this weekend as I venture to the Lands’ End store and attempt to have them give me a credit or exchange on my old Squall for a nice, new men’s version!